Where’s the Prometheus script, then? Or what the original Alien script teaches us about writing screenplays

Thursday 17 May 2012 / Charles / Comments Off on Where’s the Prometheus script, then? Or what the original Alien script teaches us about writing screenplays

(Oh, for the faint-hearted: there are NO PROMETHEUS SPOILERS here. As if.) 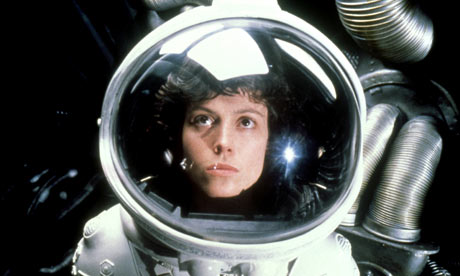 I don’t think I’d be much cop at writing screenplays – I’ve already discovered that getting through a book is quite a thing (I have a book! Digital Wars! Have you bought it? Paperback, Kindle; iBook Store) but screenplays have their own disciplines. You are writing for the screen, so you have to describe, and every scene has to carry weight. Every line has to be chosen to do its work.

You can go on wonderfully expensive courses in screenwriting, where you will learn these sorts of things. But you could also save yourself a lot of money (or get a good start) by studying the film of Alien, and then comparing it to the original screenplay for Alien, before Ridley Scott and everyone else got their hands on it, over at the Internet Movie Script database.

Formerly titled “Starbeast” and originally (if I’m parsing it right) given the treatment by Walter Hill who seems to have been involved in – whew – 48 Hours, Alien and The Getaway – he was up to direct it, originally – and David Giler, it’s up there in screenplay format.

It’s a really fascinating read, because you see many of the things that Dan O’Bannon and Ronald Shusett got right (O’Bannon is credited with the screenplay that seems to have been the basis of Scott’s film). Let’s run over those (I’m assuming from here on that you’ve seen Alien):

– adventurous astronaut who looks into.. DON’T LOOK IN THERE

– pursuit around the ship using electric prods and then flamethrowers

– picked off one by one

– blow up the ship

– escape in the ..escape thing

– blow it out and blast it with the engines

Now let’s go over some of the things that are different.

• All-male crew. This seems, in retrospect, such an incredible mistake because it doesn’t allow for the tensions and little shows of emotion, such as the implied one between [captain] Dallas and [Sigourney Weaver’s] Ripley, for example. There’s something there when he moves to protect her in the sick bay after the facehugger reappears. Subtly done, just a hint that they had – have? – a relationship.

Instead you get lines – or actions – that look wildly out of place between male crew members:

Standard turns and looks at him. For a long moment, the two men regard each other, then STANDARD STEPS FORWARD AND SLAPS ROBY ACROSS THE FACE.

Maybe it’s just me, but – one asteroid miner slaps another? Seems a bit fey, to say the least. (Also, it’s the wrong dynamic: Standard is the captain and Roby is the Ripley-character who survives. It should be the other way around.)

The all-male crew also means that the downtimes – the slowing in pace so it can speed up again – doesn’t give you a chance to feel involved in the characters, because any emotion between them (which would help you empathise with them) seems a bit more than bromance. Look, the tagline isn’t “In space, nobody can hear you scream, sweetie.” It’s an alien killer thriller. No romance, dammit.

So why does adding women into the mix improve it so much? Well, there’s Ripley, of course – the first of Sigourney Weaver’s finest hours. And there’s Veronica Cartwright as Lambert (you knew that, right?). Her role doesn’t consist of much more than looking really worried and being petrified, and taking part in the worst scene in the film (where she freezes in front of the monster while Yaphet Kotto yells at her to get out of the way – which, when you examine the original screenplay, is basically a way to get rid of the two of them and leave Ripley alone).

But she is basically the high (or low) emotional note, the Psycho-screech of the horrified, against the less worried others. She’s you and I, confronted by the alien. (That thing is scary.) You need her at one emotional extreme, and Ripley at the other. The women bracket the emotions of the film. Adding them was a masterstroke.

• names. This might seem minor, but start here: the spaceship is called the “Snark”. Snort. The one used in the film, Nostromo, is so beautifully chosen: picked from a novel by Joseph Conrad, writer of “Heart of Darkness”, with its echoes of nothingness and nowhere.

The character names seem weaker to me, though that may be familiarity – a captain called “Dallas” rather than “Standard”, “Ripley” (another hat tip to a novel – Ripley’s Game) rather than “Roby”. As I say, it might be familiarity, but I think if you stack up Dallas, Ripley, Lambert, Brett, Kane, Ash, and Parker against Standard, Roby, Melkonis, Broussard, Faust, Hunter, the better name set is clear.

One other thing that’s clear: the real film has one extra character. (Go back and count.) Which leads us to…

• subplot: the Company. There’s no “The Company” in the original screenplay. Or at least, not as a malign actor in the background that manoeuvres the crew into their terrifying fate. There’s also no Ash, the science officer who turns out to be not exactly working in the interest of the humans on board. (He lets the alien onto the ship; he doesn’t try to kill it in the early stages; he doesn’t try to stop it killing the crew. It’s an open question whether it would treat him as a machine or a human if they met.)

Adding in the Company means that there’s room for subplot, which spices up the film helpfully because it creates extra tension between the characters, at the same time that they’re worrying about the alien.

Remember that this is a screenplay, so you can’t just add subplots in blithely. The time this subplot needs is taken, I think, from scenes on the planet – mostly stumbling around pyramids and stuff.

• The computer as a character. An odd omission in a sci-fi screenplay, but the only point in the original (as opposed to the film) where someone talks directly to the computer is right at the end, when Roby/Ripley is trying to get the reactor to cool back down. Otherwise? Dumb, deaf computer. Far more sensible to have it listening and talking back. The typed dialogue with the computer in the few scenes that are added (and particularly the one where Ripley discovers that Ash is protecting it) shows that the computer is part of the crew, if not always a particularly helpful one.

• Hiding the monster. This is huge. In the original screenplay, you see the alien when it jumps out of the spore, when the astronauts still outside try to get it off, when they get him to sickbay, when it comes out of Kane’s chest, when it goes into the food store, when it grabs Brett, when it grabs someone else, when it… I was getting pretty bored of seeing its gnarly name come up.

In the film, you get far less exposure. You get glimpses, threats, hints. That’s what makes it great. You don’t get to see the whole of it until the very end, in the escape capsule. That’s tension.

• Pacing The original film doesn’t contain the scene where Ripley (Roby) discovers Dallas (Standard) cocooned in the lower decks of the ship, though it’s in the original screenplay, and was brought back in the “Director’s Cut” (aka “way to make fans buy another DVD, or go to the film again”). That’s not a screenplay issue per se, but it is about pacing, which matters.

* And finally: the ending. It seems like a small thing, but it’s not. The original ending is a twist – you thought they’d escaped! (When I first watched it, that was the sort of twist I expected.) But wiser studio heads prevailed, I think, to suggest that if you’ve done the film right, you’ve put the poor audience through enough; let them file out in peace.

That’s pretty much it: a set of how-to lessons where all you have to do is read the script online, watch the film, compare the two, and then rewrite your script so that it eliminates all those sorts of errors! Simple.

OK, and to the Prometheus stuff. This is the blockbuster film that’s getting the whack promoted out of it (in bursts), which uses the same aliens, the same bizarre alien spaceship pilot… in some configuration. Is there a Prometheus script? There is! Oh, no, wait, it’s from Stargate.

Probably the original screenplay will surface a while after the film itself releases. That’s going to be a fascinating comparison in itself.

Oh, well. Shall we meet later and discuss the original screenplay for Blade Runner?

INT. TRAIN - NIGHT
No clickitty-clack of track-bound noise, it's a long, insulated Pullman of contoured seats and low-keyed lighting, coloured to soothe,and empty, except for the passenger half way down.His eyes closed, head rested against the glass. Ten years ago, DECKARD might have been an athlete, a track man or a welter-weight.

Hmm. Get me rewrite!

« Review: Age of Miracles by Karen Thompson Walker: a marvellous novel about dealing badly with slow change Review: Prometheus: don’t waste your money or time on this film (updated) »