120 channels and everything on

“Buh-bye, Dad-dee.” The sort of words that fathers head from their two-year-old children every day. Always accompanied by that little wave they do. 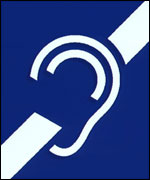 Odd to think that it’s almost exactly two years since we got the confirmation that this now two-year-old was born profoundly deaf, and on his own can’t hear pretty much anything except perhaps artillery.

Since then another 1,680 babies have been born deaf in the UK. That’s 1,680 parents who’ve had to cope, in whatever way, with knowing their otherwise perfect child can’t hear. (Some are happy, of course.)

What’s so different about us now is that we understand how it can be that a child who was born deaf can hear, and speak, and what’s more speak with diction that’s comparable with his hearing peers. Really: things are that good. Two years ago, things just looked bleak.

That’s the wonder of cochlear implants; and especially of the device that child3 is using, an Advanced Bionics with the new Hi-Res system, which simulates having 120 hearing channels (which means being able to distinguish 120 different tones) rather than the 16 or so his implant really has.

What’s odd, looking back, is how we completely didn’t know about cochlear implants. Didn’t know about a 20, 30, 40-year-technology that is almost routine to implant, whose effects (benefits and risks) are well-known. Isn’t that strange, in retrospect?

But then again – most people think that rock climbers make their ascent by banging things into the rock. There are all sorts of other things that people have misconceptions about, because they’re slightly out of the mainstream but somehow a bit well-known. I’m tempted to blame the media..

« Not to dance on their grave or anything, but.. sayonara G4. Astronauts.. Customs.. yeah, been there, written that. »