A graph to really scare you about another mortgage shock waiting in the US – and so, us 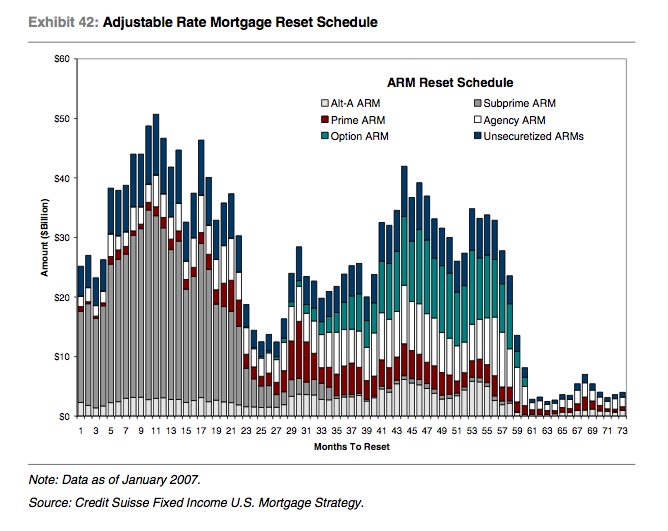 You thought that $700 billion will be the US banks’ toxic assets? It won’t – not by a long chalk. There’s another bunch of toxic mortgages just waiting around the corner, in 2010 and on, which will be just as bad, and hit more people in the US. The graph above has been swimming around a bit (here and here, particularly) but it’s worth reading the analysts’ note it originated in. (For a version of the graph with the axis in years, see the second link. It’s just as big and scary.)

The work comes in a Credit Suisse note titled “Mortgage Liquidity du Jour: Underestimated No More” (that links to Scribd, where you can download it yourself and groan).

The timing is interesting – in March 2007, who’d heard of the credit crunch? It hadn’t happened: those Bear Stearns funds hadn’t turned sour. So these people were miles ahead of the curve. Too bad too few people listened to them. (Let’s hear it for Ivy L Zelman, Dennis McGill, Justin Speer and Alan Ratner. Hope they’ve kept their jobs – they at least deserve to.)

After walking you through the craziness of the US housing market, where people were fighting for market share, and damn the consequences – “As one private builder indicated to us, in the past nine months anybody with a pulse that was interested in buying a home was able to get financing, which certainly helps explain the poor performance thus far of 2006 loan vintages” – they look at the growth of “exotic” mortgage products.

You’ve heard of subprime, of course, but probably not Alt-A – which is a step above subprime, typically (in the past) for people in the US who’d had a mortgage go bad, or missed payments. Alt-A exploded to become 20% of the market in 2006. And there it lies in wait.

The “big brother” of interest only mortgages is the negative amortization mortgage, which in recent years has gained popularity. The neg-am mortgage, which is often used synonymously with “option ARM”, provides homebuyers with an extra payment option each month. In addition to paying the fully amortized payment or just interest costs, an option ARM actually allows borrowers to make a “minimum” payment that is less than interest costs. The minimum payment option results in a homebuyer actually having negative equity in their home, absent an increase in the value of the house (i.e. the borrower owes more at the end of the month than it did at the beginning).

I actually had a “mortgage” like that once – in 1988. It was sold to me in the UK by Security Pacific, though it wasn’t interest-only – there was an endowment attached (thank God; it’ll mature some time in the next few years). But it did let you not pay all the interest, which was then rolled into the principal (the amount you owe overall, an on which interest is charged). It seemed like magic – at first. My first use of a spreadsheet was to model our payments (I bought with a friend). Abruptly I realised we were going to be in deep and hot water if we didn’t rapidly increase our payments. And when interest rates shot up following the ERM debacle, it was suddenly time to get straight out of that mortgage.

Similar to an interest only mortgage, option ARMs only provide borrowers with these payment options for a finite timeframe, which sets the stage for a significant payment shock when payments are recast to the fully amortizing rate at the current interest rate level. Depending on the amount and terms of the loan, monthly payments could increase in excess of 40% upon rate reset on these types of mortgages.

As shown in Exhibit 29 [one of the graphs], an estimated 23% of total purchase originations in 2006 were interest-only or negative-amortization mortgages. According to our private builder survey, interest-only and option ARMs represented 24% of total home sales in 2006, in-line with our market-wide estimates. This was down slightly from the levels seen in 2004 and 2005, most likely due to the decline in investors in high priced markets, as well as lenders tightening qualification standards

The trouble though is that while the subprime bomb has exploded, the option-ARM still hasn’t. People won’t be able to make the payments – especially if things are worse in the US than they are now. (At the time of the note, the analysts were able to talk breezily about “recovery” as they looked past house price falls. Nobody’s saying that word now.)

Another point that a friend (who’s an IP lawyer who understands all these things as he works in the City and deals with thme) is that in the US, a mortgage attaches to the property – not the person. If you’re in negative equity and you hand in the keys, you’re not liable for the outstanding loan. Sure, it will affect your credit score, which does affect your ability to get credit, but that’s not the same as what you’d have in the UK, where you’d pretty much have to declare bankruptcy.

So things are even worse for the US banks and mortgage lenders than you might have been led to believe – and that’s coming up in two years’ time.

Can’t we reflate the housing market, some people wonder, by cutting interest rates? Mark Shuttleworth (he flew to the moon, you know, and is behind Ubuntu) says it’s a solvency problem, not a liquidity problem:

Dramatic easing of interest rates will help to slow down the pace at which we have to deal with the bankruptcies, but they won’t change the cold reality of the situation, and they run the very real risk of making things worse by encouraging another round of speculation based on free money. We are once again in a situation where the US discount rate is effectively a negative real rate of interest, as a gift to the banks, but staying there for any length of time puts us back into a state of addiction.

« Gee, I’m going to miss those lolcats Credit Default Swaps explained; but there’s only $34.8 trillion of them.. »