Back and forth on the paywall argument 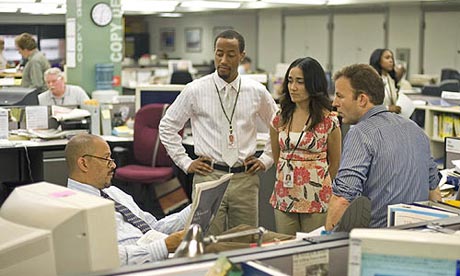 Yes, it’s a scene from Season 5 of The Wire. It’ll make sense if you read to the end.

Paywalls. We ought to talk. Please note that I’m not talking from any knowledge of any plans that commercial people in the Guardian have; I am far too lowly to know what they’re thinking about. I’m just saying that with the collapse of papers all over the place, largely caused by a collapse in print advertising that isn’t seeing a concomitant rise in online advertising spend, newspapers are going to have to think of all sorts of ways to generate revenue. Perhaps it’s selling links. Perhaps it’s buying readership. Whatever: but put everything back on the table, baby, because all those optimistic predictions from the first and second dotcom booms now look frayed and careworn.

Which makes it interesting to see Tim Burden slagging them off. Go visit his site, it’s interesting. But first, he has a post from February (see how remiss I am) which offers ten reasons why you shouldn’t have paywalls.

Let’s take them on then. (I’ve put this into an ordered list so you can see the numbers – on his post he’s done it just in paragraphs, which I think makes it hard to follow the rebuttals in the comments.)

So here we go. Here’s his assertions, his (usually shortened) arguments; click back for the full ones; and my response.

Does any of my arguments make paywalls inevitable? No. Do any of this make paywalls utterly rebuttable? I don’t think so. We’re going to see a time of huge experimentation pretty soon, and paywalls are definitely going to be in that mix.

Oh, bonus link: David Simon interviewed in the Guardian plus the shorter news story in which he says that the death of newspapers in the US will mean, in the short term, more corruption:

“The internet does froth and commentary very well, but you don’t meet many internet reporters down at the courthouse.”

(And yes, I’m aware of the irony in linking to his argument about the need for paywalls on the Guardian’s site which has no paywalls.

Oh yeah, apart from its digital archive. To point that out would be supererogatory.)

« Links: an IMF warning, and why financial journalists missed it Linkage: How to build bridges (to somewhere), and the death of free »