Sunday 1 April 2012 / Charles / Comments Off on Review: Age of Miracles by Karen Thompson Walker: a marvellous novel about dealing badly with slow change 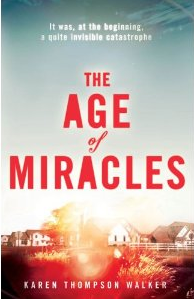 When you think about catastrophes, you normally think about too much or too little of something. And it happens all at once, somewhere.

Catastrophes such as – an asteroid hits the earth. (Actually, London was lucky not to be hit by the 1908 Tunguska meteorite; it’s on about the same latitude. Only a few minutes or even seconds saved Britain’s capital from a totally different 20th century.)

Or aliens invade.
Or a gigantic tidal wave hits us. (Or indeed hits Japan.)
Or there’s a zombie apocalypse. (Isn’t it great that the Centers for Disease Control has got a plan for the zombie apocalypse? No, maybe not.)
Or a super-abrupt ice age.

We’re used to our catastrophes being big, sudden, an abrupt surplus or deficit of something in a particular place.

But what about a catastrophe that isn’t caused by a surplus or a deficit, and which it isn’t really sudden? What would that be like?

That is the premise of The Age of Miracles, the debut novel by Karen Thompson Walker. It’s an amazing book. It was sent to my wife by one of the editors at Simon & Schuster, which is publishing it this June, but I picked it up because I was intrigued by the idea, which is this: the Earth’s rotation (on its axis, not around the sun) starts to slow down. That’s all – just slows down. And keeps getting slower.

So – the days are longer, as are the nights. But no surplus or deficit. Look, there’s that extra hour in the day you wanted. Oh, and more time to sleep. Except – the rotation keeps slowing, though only very gradually. Perhaps a few minutes extra added to each cycle every time. In the book, they call it the Slowing. (They don’t use the capital, but I think you would.)

The story is told through the eyes of Julia, an 11-year-old girl living somewhere in southern California. It’s that age – when the most important thing at school is who you’re friends with, who’s in and who’s out and (if you’re an 11-year-old girl) whether that dishy boy is going to sit near you when you get on the bus.

You’re probably thinking, first: what difference would it make if the earth’s rotation slowed down anyway? And then: how could that happen, anyway?

First: the difference would be huge, but ever so slow. Gravity would change (less rotation, greater centripetal force means we’d feel heavier). And our circadian rhythms would soon fall out of kilter; as the day (and night) stretches from 12 hours to 15 to 20 and more, you just can’t keep adjusting.

So the government announces: hell, yes, we’re just going to carry on with the 24-hour clock. Though some people try to live on “natural time”, which is to say, by the sunrise and sunset.

And Julia carries on, even while the days and the nights lengthen – so that sometimes she’s waking up in darkness to go to her early morning school bus ride – being obsessed with who she’s friends with, and the boy who sometimes talks to her on the bus. The world is sliding into confusion but she doesn’t look wider. The birds begin to die (the gravity? Who knows?), the whales beach themselves, trees start to die… but what’s really important is who your friends are talking to and why that new girl isn’t speaking to you.

I assume that the location it’s set in is quite close to the equator, because there’s not much seasonal variation in the relative length of days and nights. (Or it’s not commented on.) I did wonder whether Walker had spoken to people from northerly latitudes about how they cope with almost endless darkness in winter, and almost endless sunlight in summer; although this isn’t quite about that.

It’s a brilliant book; while the premise is impossible (well, almost utterly – see below**), this book isn’t really about the idea of the Earth slowing down. It’s about how we are as a species. At an individual level we’re powerless, most of all over slow change. We can deal with abrupt change – well, abrupt short-lived change – and hope to come out mostly unruffled. OK, abrupt, short-lived very localised ones such as tsunamis or hurricanes. Those, we can handle.

But very slow, yet enormously important catastrophes? We’re not very good at those. As individuals, as nations, as a species. We focus on the close-at-hand, the short-term. We argue with each other and basically ignore what’s going on around us.

Because I have to ask: can you think of any planet-wide changes that are happening ever so gradually which will have colossal effects (to which we’re perhaps even contributing) and which we’re mostly ignoring, or just paying lip service to, and carrying on as normal?

Yeah. That one. Thought you might be able to.

That’s what makes this book so subtly brilliant. It points out our Achilles heel: we’re so bad at dealing with the slow. We reckon we can deal (we hope) with the sudden – though if we’re honest we don’t know how we’d cope with an asteroid impact of any significance; or, come to that, the zombie apocalypse. But dealing with slow? We’re just frogs in the cooking pot.

You might be wondering whether the people faced with the Slowing would try to fix it: attach rockets to the earth and try to speed it up? But (even if they do that, except I’m not doing the plot here) that’s not what this book is about; it’s a changing world seen from the point of view of an 11-year-old. They tend not to know too much about the adult thinking going on over how to reseed the planet’s rotational momentum, apart from what they hear people talking about on TV.

Cleverly, the book is written in a sort of future present – “if we’d known then how it would turn out, we wouldn’t have concentrated so much on [some trivial thing]” – which gives you both the confidence that the Slowing is survivable, and yet contains an inkling that things don’t seem to have been solved by the time the narrator is writing. (And you don’t know how near or far ahead that is, either.)

It’s a book whose premise stays with you long after; I finished reading it weeks ago, yet when I drive home in darkness or light, I think of the people in that novel, and wonder about how it would be for the days or the nights to just continue, creeping on in this petty pace, not relenting. (The UK edition has a far better cover than the US one; it captures that tension of the sun, which you don’t want to go away and yet you don’t want to stay either after a day that has gone on and on.)

And even though the world is going to keep turning, there’s still the question of what happens when we slowly run out of stuff. That’s the topic of a TED talk by Paul Gilding – “The Earth is full” (here’s the video) which makes uncomfortable reading if you think about it for any length of time.

But of course it’s much easier to ignore it, carry on as before, assume nothing catastropic will happen.

Note that the book isn’t published until June 2012. You’ll just have to add it to your wishlist. Please do. It’s a fascinating read.

(**OK, to the issue of whether the earth could slow down. For this to happen, the planet would have to lose a ton of rotational momentum. The only way this could happen is if its centre of rotational gravity – if that’s a word – were to shift towards the centre of the earth. About the only way that I can imagine that happening is if the earth were to stray into the path of a black hole about the size of a dozen atoms or so, which was then trapped in the earth’s core, sucking everything in eeeeeevvverr so slowly. If I’m remembering my maths right, that increase in central mass would reduce the rotational momentum of the planet and so lead to it slowing down. Read up about micro black holes if you want to really do the maths. Of course, if there were a black hole at the centre of the planet large enough to eat its core, then we’d have rather bigger problems ahead than rotation. But that’s for another time. The theory, at Wikipedia, suggests it wouldn’t happen – such a tiny black hole would just pass through the planet without touching it.) //back

« Review: Star Wars episode 1: The Phantom Menace in 3D: you sure it’s 3d? Where’s the Prometheus script, then? Or what the original Alien script teaches us about writing screenplays »